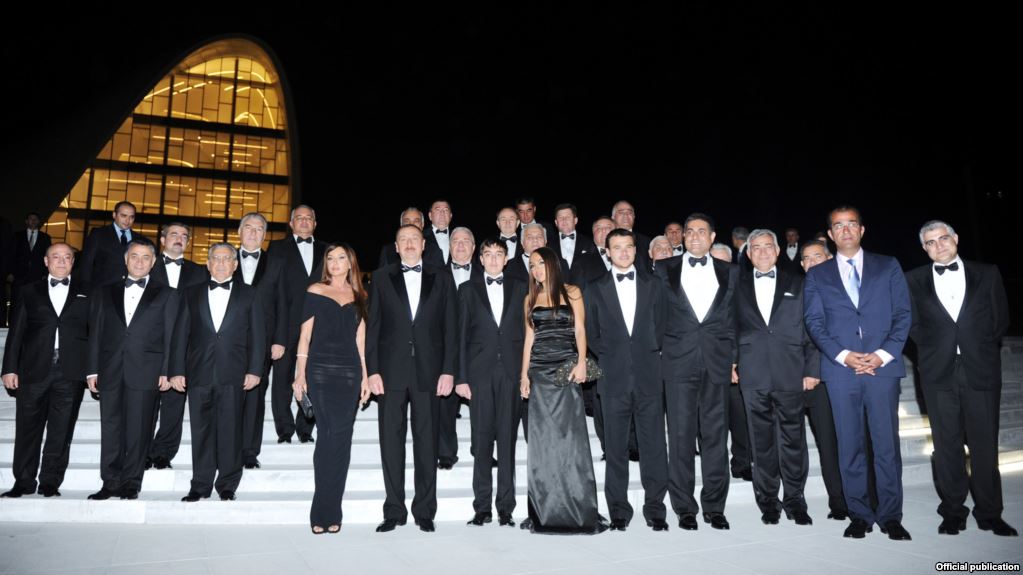 Azerbaijan spends millions of dollars to improve its image abroad.

In recent years, the regime of Azerbaijani President Ilham Aliyev has spent millions of dollars to persuade politicians in Europe and the United States that the oil-rich Caucasus country is a reliable partner — and to distract them from criticism that the country is authoritarian and fails to respect fundamental human rights. This policy of lobbying the interests of official Baku is called “caviar diplomacy”.

At the end of October,  some 600 Washington movers and shakers gathered in the columned halls of the National Building Museum for a five-course dinner and show sponsored by the Azerbaijan-America Alliance. The evening was hosted by alliance Chairman and former U.S. Congressman Dan Burton. The event’s “honorary host committee” included four U.S. senators and 13 members of Congress.

Joshua Noonan, an Azerbaijan analyst for “The Conway Bulletin” who attended the Washington gala, said “it was a useful endeavor for them because they had former congressmen and people from D.C.’s media establishment, a lot of the people who lobby for them were there too. It was kind of interesting. It was a great event.”

The lavish event was part of Baku’s aggressive strategy of “caviar diplomacy,” using a broad array of gifts and junkets and other inducements to shift the opinions of policy makers in Azerbaijan’s favor.

But “caviar diplomacy” does not always work. Former U.S. Ambassador to Azerbaijan Richard Kauzlarich believes that “events like this only highlight the contrast between reality and fiction about Azerbaijan.”

The term “caviar diplomacy” came to the fore as the title of a May 2012 report by the European Stability Initiative (ESI), a think tank specializing in southeastern Europe and EU enlargement issues. Gerald Knaus, ESI chairman and an author of the Azerbaijan report said: “As Azerbaijan’s democratic and human rights situation continued to deteriorate, the Council of Europe – whose role it is to safeguard European standards of democracy and human rights – became less and less vocal and increasingly silent in its criticism,” Knaus said. “This concerned elections, political prisoners, general monitoring of Azerbaijan’s obligations toward the Council of Europe concerning human rights. So we set out to try to understand and describe how this process of silencing this institution actually operated and how it worked.”

Rebecca Vincent, a human rights activist based in London and a former U.S. diplomat in Baku, says how difficult it is to stand against “caviar diplomacy”.

“From the perspective of a human rights defender, it makes our work very difficult at some of these European institutions, specifically the Council of Europe – I think it is also going on at the European Union – when we go to raise concerns about human rights issues, there are very clearly policy makers who have already been swayed the other way,” Vincent says.

The ESI report mentions, among others, former German Christian Democrat lawmaker and former PACE member Eduard Lintner, who was part of a PACE delegation that observed an Azerbaijani referendum in March 2009 that abolished presidential term limits and paved the way for President Aliyev to remain in office indefinitely. That PACE delegation’s report said that the widely criticized referendum “showed the willingness of the people of Azerbaijan to have greater stability and elements for further democratization.” By the end of 2009, Lintner had left PACE to become chairman of the Society for Promoting German-Azerbaijani Relations (GEFDAB) — a shadowy organization described as a de facto lobbying group for Baku.

For last month’s presidential election in Azerbaijan, in which Aliyev was awarded a third term by a landslide, the GEFDAB sponsored an election-monitoring mission by a Belgian-registered NGO. That mission found the election “fair, democratic, and transparent.”

Baku’s efforts in Europe seemed to bear fruit in January when the PACE rejected — by a vote of 175 against to 79 in favor — a tough report prepared by special rapporteur Christoph Strasser identifying 85 political prisoners in Azerbaijan and calling for their release. German MEP Strasser has not been given a visa to enter Azerbaijan since he was named special rapporteur in 2009.

In many ways, Baku’s caviar-diplomacy offensive seems tied to last month’s presidential election. According to the ESI, which this week issued a report on the election and its aftermath, no fewer than 50 organizations sent election-monitoring teams to Baku. Forty-nine of them – mostly obscure and many of them connected with Azerbaijani-funded NGOs such as Lintner’s GEFDAB, praised the ballot. Only the Organization for Security and Cooperation in Europe (OSCE) criticized the election as undemocratic and not compliant with international standards. Baku has since threatened to sharply curtail its cooperation with the OSCE.

Former U.S. diplomat Vincent does not hesitate to call the actions of many European lawmakers “unethical.”

“It certainly sends the wrong impression. I think, particularly for policy makers from democratic countries where they enjoy basic rights and fundamental freedoms to be propping up an authoritarian regime that is not respecting the rights of its citizens when their constituents at home have no idea actually what they are up to abroad — it isn’t quite right,” Vincent said.

The work of the Azerbaijan-America Alliance seems to be a geographical extension of Baku’s efforts in Europe. Although it is officially an NGO, it was created by Anar Mammadov, an Azerbaijani oligarch and son of Transport Minister Ziya Mammadov. Even a quick look at the group’s website shows it strictly follows the Azerbaijani government’s positions. One of the main goals of the alliance is to expand the Azerbaijan Caucus in the U.S. Congress. That group, which was founded in 2004, now has 46 members.

Analyst Noonan, who attended the recent D.C. gala, says that Baku’s “caviar diplomacy” is unlikely to be as influential in the United States as they seem to have been in Europe.

“[Baku’s caviar diplomacy] is useful in reaching out to higher-level individuals in D.C., but this lobbying effort will not be a success in the long term if constituents of the representatives are not engaged. Without that engagement, this is just making linkages. You are not going to affect policy at a deep level,” Noonan said.

According to the Internet resource Opensecrets.org, this year the Alliance paid almost $ 2 million to the well-known lobbying firm Fabiani & Company – more than half of its revenues from lobbying. Last year, the company received about two and a half million dollars from the “Azerbaijani-American alliance”.

1 year ago 2503 Azerbaijan is no longer in Berlin
1 year ago 993 Кто задействован в Азербайджан-Connection?
2 years ago 1636 The Germans want to know: What contains the agreement of the Humboldt University and who finances the chair "History of Azerbaijan"

Reports Nikolas Löbel: My trip to Azerbaijan. Report It's international. It raises questions. It is the gateway between Orient and Occident. It's called Azerbaijan. There is a lot to say about Azerbaijan: Yes, Azerbaijan cannot be compared to a Western-style democracy. Yes, in Aze... 11 months ago 757
Cash from the autocrat
Alfred Gusenbauer: Money from Azerbaijan
UEFA ends partnership with controversial sponsor
Dirty money and the perfect crime

Europe How one Azeri influence organization works Available in 6 months ago 432
7 months ago 498 Relations of the Swedish Foreign Ministry with the dictatorship of Azerbaijan
7 months ago 503 Rasmus Canbäk: Caviar diplomacy in Sweden

Europe
How one Azeri influence organization works 6 months ago 432
Analytics
Relations of the Swedish Foreign Ministry with the dictatorship of Azerbaijan 7 months ago 498
Europe
Rasmus Canbäk: Caviar diplomacy in Sweden 7 months ago 503