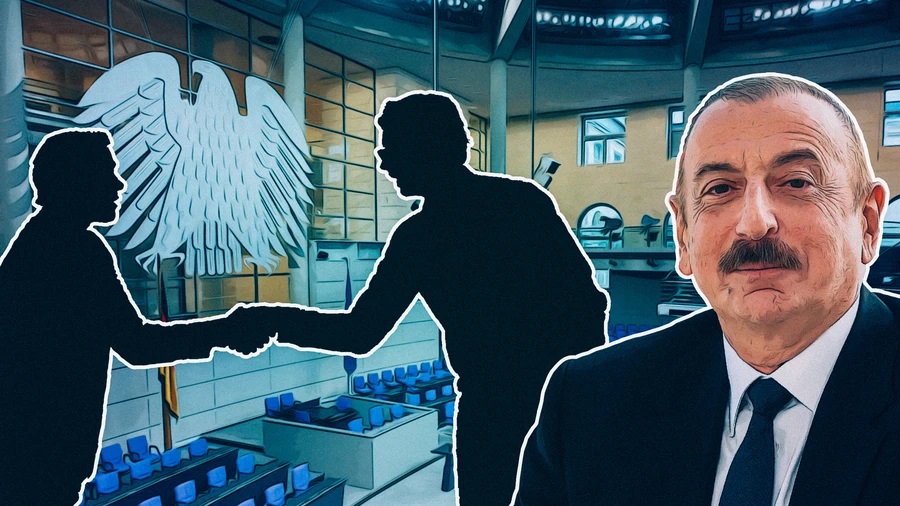 New VICE research on the #Azerbaijan affair: Aliyev’s secret army of interns in the Bundestag, Germany.

Interns from Azerbaijan establish a network in parliament. With strange connections to the Aliyev regime – and to German politicians

Azerbaijan affair: Aliyev’s secret army of interns in the Bundestag
Azerbaijani interns have been building networks in the Bundestag for years. You have strange contacts with the Aliyev regime – and with German politicians.

Anyone who has already been an intern at a large institution knows the feeling of invisibility. You are right in the middle of it – and still almost anonymous. A gray mouse in a gigantic device. What is more of a disadvantage for many can also be an advantage – for example if you don’t want to attract attention.

Azerbaijani interns associated with the Aliyev regime have been active in the German Bundestag, the center of power. They were used by members of the Bundestag, some of whom themselves maintain dubious connections to the South Caucasus.

We took a closer look at these connections, researched the biographies of the interns and examined the system behind them. A system with many actors. Participants are: a renowned Berlin university that receives hundreds of thousands of euros from Azerbaijan, members of almost all parliamentary parties and the embassies of two countries.

They all helped to ensure that interns were employed at the center of German democracy who have close ties to the Aliyev regime. An authoritarian regime in the South Caucasus that abuses opposition members, locks them up and persecutes journalists. The Azerbaijani president has ruled for almost 20 years, and last year he waged a bloody war over Nagorno-Karabakh.

We have shortened the names of most of the interns as the point is not to issue them in person. We want to fathom the system behind it. We only name those interns who have now taken on important functions themselves.
The network of Azerbaijani interns in the Bundestag spans several parliamentary groups. And of course: the problem is not where they come from. On the contrary: interns from abroad can strengthen friendly relationships between countries and break down prejudices. The problem is their political background, their dubious loyalties. In the Bundestag, a Prakti network was evidently able to form over the years, which is close to the authoritarian ruler Aliyev and which is consolidating his influence abroad. To the detriment of the free press and the opposition in Baku.

Interns in the Bundestag have a house ID, they come almost everywhere. In parliamentary offices, committees, in conference rooms.

One of them is Asif M. He comes to the Bundestag as an intern at a time when Baku, after the Eurovision Song Contest, is preparing for the next international event: the European Games 2015.

M. is staying with Katrin Kunert, a member of the Left from Saxony-Anhalt. M. is well educated, studied international relations in Baku, served in the military and did a master’s degree in political science at the University of Göttingen. And in the Kunert office he has an affectionate supervisor who is something of an Azerbaijan expert himself. Critics from within his own ranks call him “biased” and that is still the kindest verdict. He still works in the Bundestag.
In an uncritical article in Neues Deutschland, the former Kunert employee describes the authoritarian ruled Azerbaijan as a “self-confident Caucasus tiger”. He himself often travels to Baku and gives lectures at lobby events.

M. uses his time as an intern, among other things, to run a blog in which he represents pro-regime positions. Not a word about human rights violations by Aliyev, not a sentence about journalists or members of the opposition locked up. On the other hand, M. publishes many articles about injustices that are beingfall Azerbaijan. In his eyes, neighboring Armenia is an “aggressor”.

In his internship report, M. talks enthusiastically about his time as an intern. You get the impression that he got a lot of exciting insights. For example, he writes in his report, he was allowed to research the budget development of the OSCE. This is remarkable because the OSCE is watching elections. In Azerbaijan, she regularly detects violations. The official observers are a thorn in the side of the regime. Why did M. collect information about the OSCE?

We asked Katrin Kunert, who was temporarily a deputy member of the parliamentary assembly of the OSCE, whether M. was actually allowed to research this sensitive topic. Kunert is no longer in the Bundestag. She reacts in general to our specific answer: She gave all interns the opportunity to “get involved in

to bring in the work of their Bundestag offices and not just do copy work “.

After his internship, M. becomes something of an Azerbaijan influencer in Berlin. He conducts video interviews with politicians, which he uploads to YouTube. Writes essays that he promotes on his blog. Most of the time it’s about Azerbaijan, often about the Nagorno-Karabakh conflict. M. gives his contributions a scientific touch. If a quote can be used, then regime media in Azerbaijan quote his interviews with politicians. The talks are characterized by unity, there is hardly any controversy.

M. often adapts the narrative of the interviews to suit his guest. If a Kurdish-German MP is visiting, he starts with a suggestive question about the suffering of the Kurds, for which the Armenians are responsible. If he meets a member of the Greens, he speaks exclusively about the ailing Armenian nuclear power plant “Metsamor”. He also interviews the CDU MPs Gutting and Löbel.

The Humboldt Chair, financed from Baku, are both confronted with accusations of being too uncritical about the Aliyev regime or of cultivating dubious connections to the South Caucasus. The allegations against Löbel go back to 2012, when he organized a party congress of the Junge Union, with financial support from Azerbaijan. Gutting recently stumbled when he first denied and then admitted ties to the Azerbaijani lobby organization TEAS. In the video interview with M. Gutting praised the long democratic tradition in Azerbaijan. That also earned him some criticism.

M. rose quickly after his internship. He founds an alumni portal in which ex-interns from the Bundestag are also organized. He is first an intern and then Secretary General of the “Azerbaijan Student Network”, a student lobby network.

Since 2016 he has been working as a research assistant at the Humboldt University. How scientifically M. works there is difficult to say. The chair “History of Azerbaijan” is financed from Baku, an academic unicum, a chair donated by another state. It is led by Eva-Maria Auch. She traveled to Azerbaijan in mid-April to meet Ilham Aliyev and to visit a newly opened, martial trophy park, in which the helmets of killed Armenian soldiers are on display. The park shows wax figures of dying Armenian soldiers. A state mockery of the enemy after winning the battle for Nagorno-Karabakh.

“I am very happy to be in Azerbaijan,” said the HU professor during a visit to a university, according to the Azerbaijani media. “You have waited many years to liberate your country from the occupation.” A German professor, paid from Azerbaijan, the dictator’s mouthpiece?

The Humboldt Uni plays a decisive role in the Azerbaijani internship network, a problematic, cautiously phrased one. The HU responds in monosyllables to inquiries. But more on that later.

Katrin Kunert, the former left-wing MP from Saxony-Anhalt, does not want to answer us when we ask whether she was in contact with M. after his internship. Not even if she knew him beforehand and consciously guided him into her office.

Instead, she refers to the Bundestag administration, which organizes the “International Parliamentary Scholarship” (IPS), which M. was also a scholarship holder. Kunert writes by email: “Many of your questions should have been settled afterwards, so that you can check for yourself whether you want to continue paying attention to the topic.” Does she want to keep us from asking further?

Regimen-based interns: coincidence or intent?
We ask the Bundestag administration about IPS and hope for clarification. But instead of answers, there are only further inconsistencies. The international internship program, which, according to self-promotion, aims to promote peaceful coexistence in the world and consolidate democratic values, remains a mystery. Why does IPS support so many well-educated Azerbaijanis who are clearly on the side of the Aliyev regime? How reliable is the selection process? Several dozen pro-regime interns in the Bundestag: Is that a coincidence or an intention?

One answer to that question lies in the story of Nurlan Hasanov, at least part of the answer. He was also an IPS intern in the Bundestag. He is now an MP in Baku and a public figure. That is why we are giving his full name here.
When Hasanov takes up his post in the Bundestag, his home country is preparing for the biggest prestige project in decades, the sparkling appearance on the world stage, the Eurovision Song Contest in Baku 2012. The ESC is supposed to outshine all the reports on human rights violations. Critical journalists who expose corruption in the Aliyev family are being prosecuted. People have to leave their homes for construction projects, they are deported

Left faction in the Berlin House of Representatives shows that the Azerbaijan professorship at Humboldt University received more than one million euros from Baku in 2017 alone.

Does the chair endowed by the Aliyev regime choose Azerbaijani interns for the Bundestag? That chair, which is headed by a professor who meets Ilham Aliyev for an exchange and visits a martial war trophy park in Azerbaijan, in which killed Armenians are mocked?
The HU press office is covered and passes us on to the Bundestag administration. In response to a second request, the press office then informs us by one-line that the HU has no influence on the selection of interns. That can’t be entirely true.

On Facebook we find pictures of the German embassy in Baku. They show how the IPS selection delegation visited the Azerbaijani capital in autumn 2019. The CDU member Jan Metzler, as head of the delegation. An employee of the Bundestag administration. And Professor Dr. Peter Frensch, Vice President of the Humboldt University.

Why does the press office of the Humboldt University claim that it has no influence on the selection of Azerbaijani interns, although the HU Vice President was on the selection committee in 2019 and even traveled to Baku? We ask again, the HU press office asks for more time. We are waiting.

An answer comes after hours. It is even more general and stilted than all previous ones: “The IPS scholarship holders are selected by an independent selection committee of the German Bundestag with the participation of the Berlin universities on the basis of professional, social, linguistic and intercultural skills.” Hidden again

As the Bundestag administration advertises, IPS is actually an “internship in the heart of democracy”. After our research we are no longer sure whether this heart is well protected.

Full article is available in  Russian or Deutsch

2 months ago 43 How an Authoritarian Regime Infiltrated a Government in the Heart of Europe
2 months ago 207 Bundestag deputy accused of lobbying Azerbaijan's interests has died
3 years ago 246 Who wants to be a billionaire, he will go to jail

Analytics Azerbaijan affair: the adventurous journeys of a German State Secretary CDU man Thomas Bareiß flies to Baku again and again. Accompanied by men who are dubious about the regime. Some are being investigated. Who paid for their trips? Available in Russian... 4 days ago 19
2 weeks ago 12 Azerbaijan case: CDU politician Otto Hauser sues VICE investigative journalism
4 weeks ago 356 Azerbaijan affair: Aliyev's secret army of interns in the Bundestag

Europe
Bundestag of German Republic deprived of Parliamentary immunity a member of parliament regarding his connection with Azerbaijani fraud 2 months ago 344
Reports
Dirty money and the perfect crime 2 years ago 190
Europe
Money from Azerbaijan: a deputy from the CDU is suspected of corruption ties 3 years ago 404